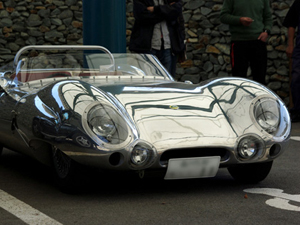 The Eleven was designed by Colin Chapman and fitted with a sleek body designed by aerodynamicist Frank Costin. Its top version, dubbed Le Mans, was generally fitted with a 1100 cc (67ci) Coventry Climax FWA engine and occasionally with a 1500 cc (92ci) Coventry Climax FWB engine mounted in the front of a tubular space frame and featured a De Dion rear axle and Girling disc brakes. Fully loaded, the car weighed only about 1,000 lb (450 kg). Versions for a 1100 cc (67ci) Climax engine (Club) and a 1172 cc (72ci) Ford engine (Sport) were also produced; both featured a live rear axle and drum brakes. Several cars were fitted with alternative engines by their owners, these included Coventry Climax 1500cc (92ci) FWB and FPF and 1200 cc (73ci) FWE, Maserati 150S 1500cc (92ci), DKW 1000cc (61ci) SAAB 850cc (52ci) and 750cc (46ci) engines. There were two main body styles: one with a headrest and the other with no headrest, just two small fins. Some cars were later fitted with a closed body with gullwing doors to meet GT specifications. 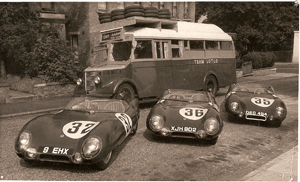 Despite the wide variety of engines installed, the car was primarily designed to compete in the 1100 cc class where it was one of the most successful cars during the mid- to late-1950s. In 1956, An Eleven, modified by Costin with a bubble canopy over the cockpit, was driven by Stirling Moss to a class world record of 143 mph (230 km/h) for a lap at Monza. Several class victories at Le Mans and Sebring followed, and the Eleven became Lotus' most successful race car design. A 750cc version won the Index of Performance at Le Mans in 1957. 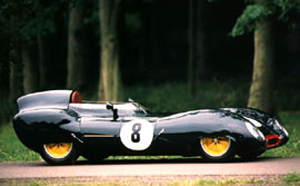 In 1957, the Eleven underwent a major design change, including a new front suspension and improvements to the drivetrain. Although officially called Eleven Series 2, these late models are sometimes informally referred to as Lotus 13s, since they were produced between the 12 and 14 models and the 13 designation was not used by Lotus. There have been several replicas and re-creations of the Lotus Eleven, including the Kokopelli 11, the Challenger GTS, the Spartak and the best known, the Westfield Eleven.